As support calls continue to come in, we have been beefing up our online support portal!  Part of this push has included posting all of our help document articles online in our support forum.

We also have a variety of tutorial videos posted, with more being added daily!  if you need additional assistance, don’t hesitate to open a ticket on our support site, or call us directly at 1-877-661-9990.  When you use Yearbooks Desktop, our support team is always standing by to back you up.

The Professional School Photographers Association (PSPA) has been defining the industry standard for photo CD’s in the yearbook industry for many years.  Obviously, our program is built to work based on this standard, so we’re dedicating today’s blog post to all things PSPA.

We have posted all of our PSPA related help documents and tech notes to our support site.  Check them out here!  This page includes instructions for importing PSPA and non PSPA CD’s into our Yearbooks program as well.

A Shout Out to Bill Nye 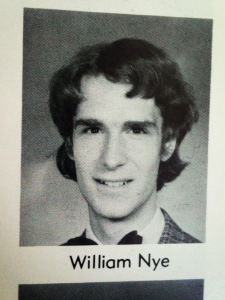 Last week, Bill Nye, best known as “the science guy” turned 57!  What better way for us to give a shout out to Bill than to post his old yearbook photo in our blog!

Nye began his professional entertainment career as an actor on a local sketch comedy television show in Seattle,Washington Almost Live!; he attempted to correct the show host’s pronunciation of “gigawatt” as “jigowatt.” The host responded, “Who do you think you are—Bill Nye the Science Guy?” and thus his on screen persona was born.

Soon after, Nye hosted an educational television program, Bill Nye the Science Guy, from 1993 to 1998. Each of the 100 episodes aimed to teach a specific topic in science to a preteen audience, yet it garnered a wide adult audience as well.  With it’s comedic overtones, the show became very popular as a teaching aid in schools.  Nye continues to educate children and adult audiences today.

Thanks Bill!  You are one of the greats!